Consider this story of two men. One man consistently comes home from work at precisely 5:45 every day. Another man arrives home every day anywhere between 5:30 and 6:30. One day, the first man is not home by 6:00. He's only 15 minutes late, but his family is not used to him not being home on time, so they worry that something bad has happened. One day, the other man is not not home by 7:00. Despite his being 30 minutes late, his family is not too concerned because they are used to his arrival time being highly variable.

My wife and I have been homeowners twice, and both times we have either refinished or installed wood floors. I have noticed that my behavior changes when the floors are nice. When the floors were scuffed up, with dings, dents and patches where the polyurethane had worn down, we were not that careful about sliding furniture across the floor. But, now with perfect floors, I want them to stay perfect as long as possible, so we tip-toe around in socks and every little dent and scratch bothers me. (If you've ever had wood floors, you know that it is impossible to keep them in perfect shape. Especially after the movers slide your furniture around!)

It does not seem hard to imagine that the same phenomenon affects the way our communities are built. The more uniform we become, the less variance we can tolerate. For example, imagine a town where everyone lives in nearly identical houses, earns nearly identical incomes, shares a nearly identical cultural background, and maintains nearly identical front yards. That’s not too far off from some real places that exist, places where we may develop such a low tolerance of chaos that even having the wrong blinds can upset our neighbors.

I could not help but think of the planners and legislators that get frustrated any time people do not act according to what they prescribe. Whether it is something simple such as people wearing a desire path through the grass instead of taking the provided path the long way round, painting in their own bike lane, or getting upset because people are finding a creative way to provide affordable housing that the law did not intend. When we attempt to micromanage every small detail, that which does not act the way we want will annoy us.

The wrong kind of city building is that which obsesses over the iron grid, with a perfect plat that divides the land into perfectly identical lots, with perfectly straight build-to lines, and perfectly matching height limits. If we aim for perfection, small imperfections will bother us—the one building that is set back too far, or is too short, or too tall, or is on a non-conforming lot, or the one street that is narrower than the rest. 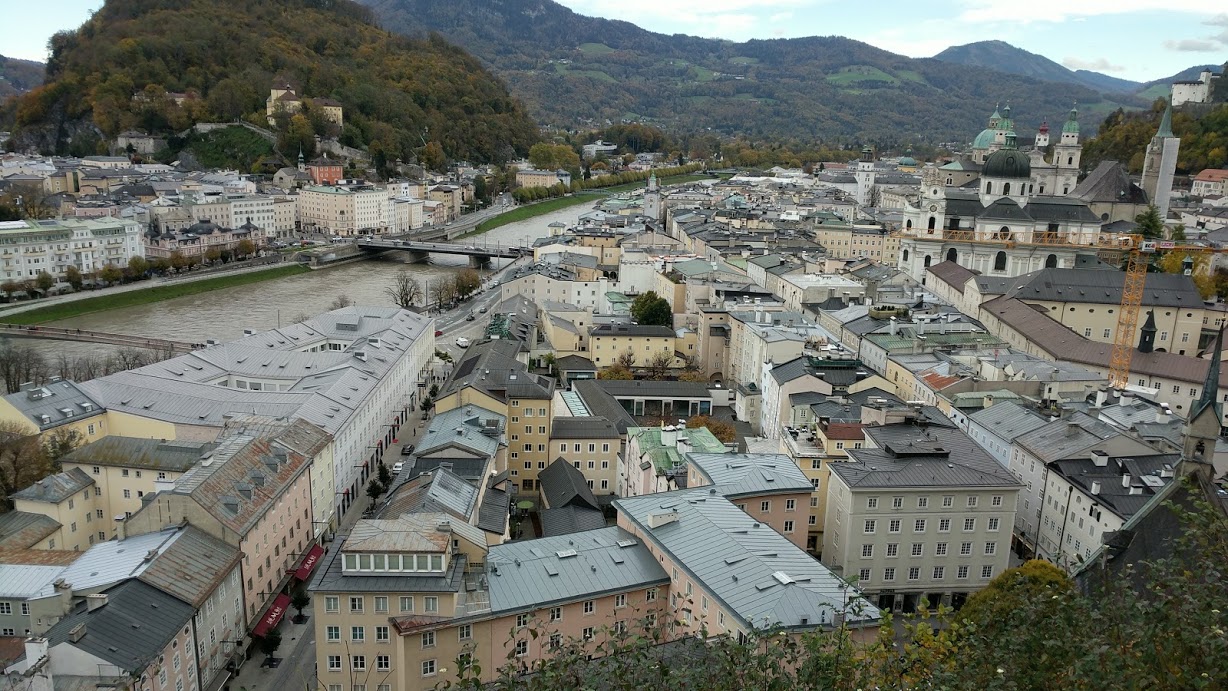 Overlooking Salzburg, Austria. Notice the jaggered rooftops, the inconsistent orientation and widths of buildings, and the slight curvature of every street. Nothing is perfect.

The buildings did not perfectly follow a build-to line. The odd building would randomly be set back further than its neighbor, or overhang into the street.

A street in Zurich, Switzerland that suddenly narrows because a building sticks out into the street further than its neighborhood. 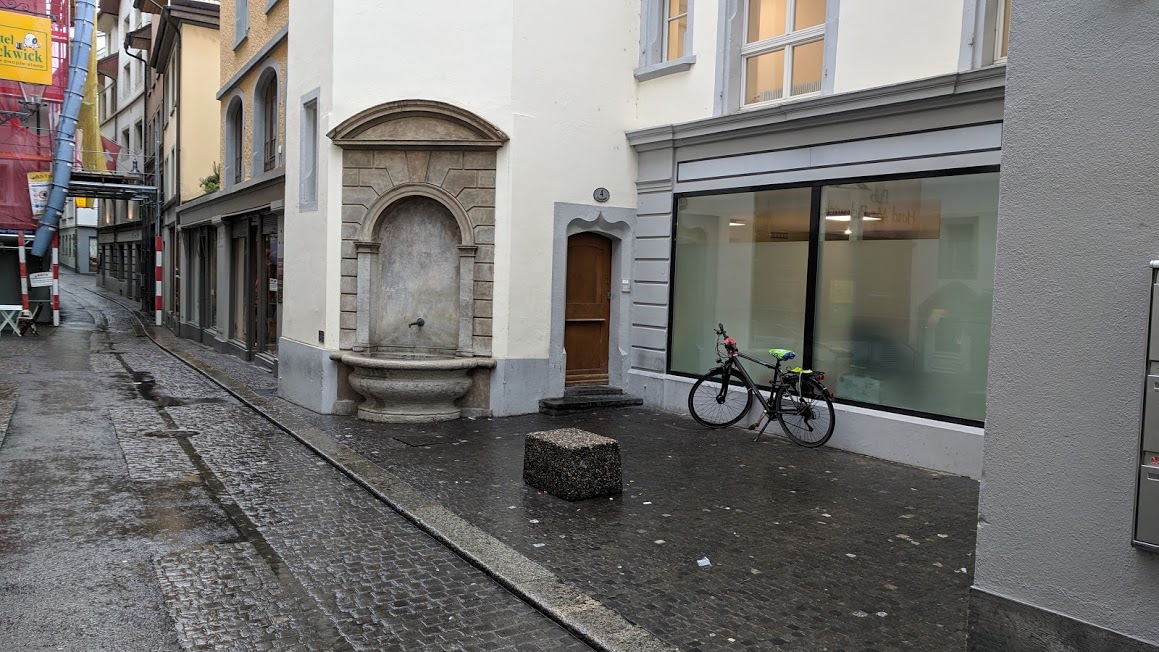 Because the buildings were not perfectly aligned, we find nooks and crannies that are often used for fountains, outdoor dining, or sometimes bicycle or car parking, such as here in Lucerne, Switzerland.

The streets themselves were often not uniformly wide; they would narrow and widen multiple times. I witnessed two cars traveling in opposite directions where the street narrowed into enough of a bottleneck that only one car could comfortably fit at a time. One car politely slowed down and waited for the other car to pass. It was all very civilized, similar to when you encounter another traveler on a rural backroad bridge only wide enough for one car.

A street with cars that bottlenecks then widens.

Because nothing was perfect, the imperfections added character.

I have read multiple places that our brains are intrigued by contrast. The large, open spaces of the squares in medieval neighborhoods work well when they are far and few between and contrasted with the narrow streets leading up to them. When you visit a city that is all open-space, with nothing to contrast it against, the open space becomes dull and uninviting.

A large square in Salzburg, Austria. 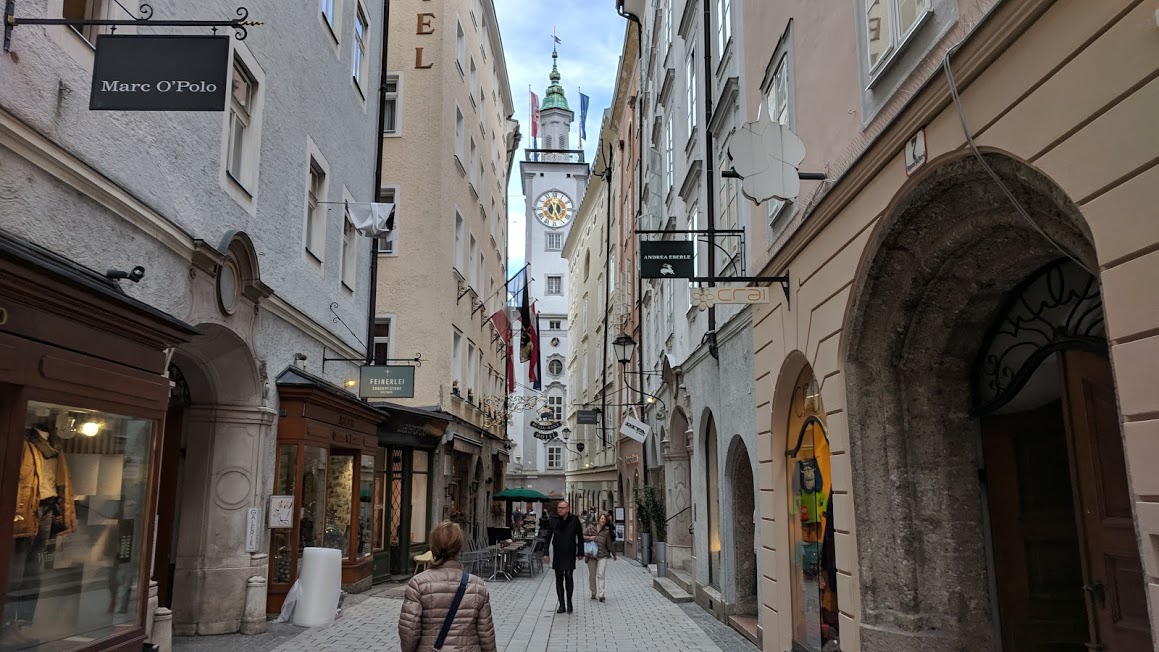 A street near the square.

Contrast is important in creating an intriguing urban landscape. One of the things that make walking through Manhattan so interesting is the contrast you experience as you go between neighborhoods. One only has to walk a few miles to pass through the brick townhomes of Greenwich Village, the cast iron lofts of SoHo, and the tenements of Little Italy all within a 30 minute stroll. Not much is more bland than passing some combination of the same stores, which is a popular criticism of gentrification—the replacement of local businesses by Starbucks, CVS, and Chipotle. A similar lack of diversity can be found in suburbs of identical cookie cutter houses and the auto-oriented businesses along stroads that look no different whether in suburban Texas or suburban New York (or suburban Europe for that matter, along with identical looking Starbucks stores and strip malls). 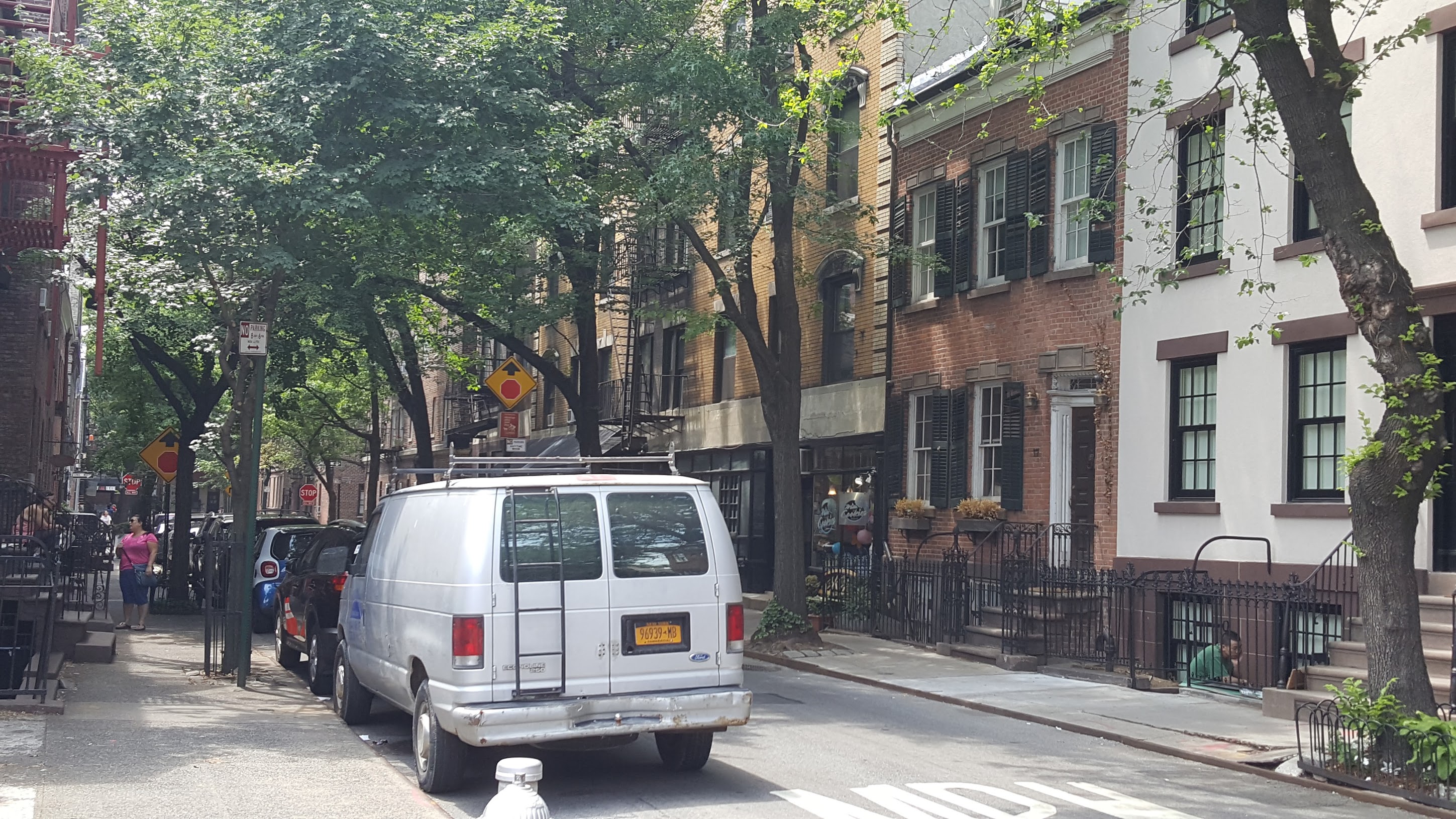 The cast iron architecture of SoHo.

Good urbanism is about embracing diversity, encouraging it to flourish and not adhering to rigid uniformity.